A computer simulation shows the collision of two black holes, a tremendously powerful event detected for the first time ever by the Laser Interferometer Gravitational-Wave Observatory, or LIGO. LIGO detected gravitational waves, or ripples in space and time generated as the black holes spiraled in toward each other, collided, and merged. This simulation shows how the merger would appear to our eyes if we could somehow travel in a spaceship for a closer look. It was created by solving equations from Albert Einstein's general theory of relativity using the LIGO data.

The two merging black holes are each roughly 30 times the mass of the sun, with one slightly larger than the other. Time has been slowed down by a factor of about 100. The event took place 1.3 billion years ago. 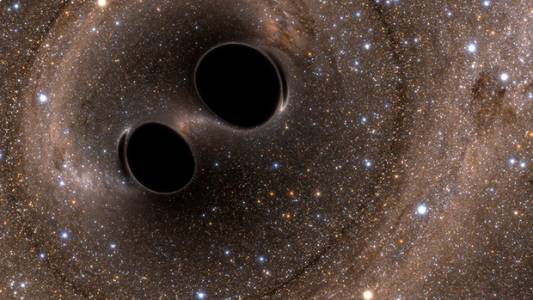 GW150914, the first ever detected gravitaional wave, came from two black holes that merged over a billion light years from Earth. This picture is extracted from a computer simulation showing what this would look like up close.
The black holes are near us, in front of a sky filled with stars and gas and dust. The black regions are the shadows of the two black holes: no light would reach us from these areas. Light from each star or bit of gas or dust travels to our eyes along paths (light rays) that are greatly bent by the holes' gravity and by their warped spacetime.