Virgo is a laser interferometer with two orthogonal arms each 3 kilometers long. A beam splitter, i.e. a semitransparent mirror tilted at 45 deg (named BS in figure below), divides the incident laser beam into two equal beams which are then sent into the two arms of the interferometer. In each arm, a two mirrors Fabry-Perot resonant cavity extends the effective optical length from 3 to more than 200 kilometers because of multiple reflections between the two mirrors. Hence, this setup will amplify the extremely small arm length variation caused by a passing gravitational wave. The two beams of laser light coming back from the two arms, are then recombined in anti-phase (i.e. destructively) on a photodetector so that, in principle, no light reaches the photodetector. An incoming gravitational wave will change differently the length of the two arms as probed by the circulating light, resulting in a very small phase shift between the beams and, thus the appearance of a tiny amount of light on the photo-detector, the amount of light being proportional to the wave’s amplitude. The tiny light variation seen by the photodetector is the expected gravitational wave signal. 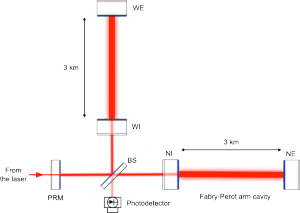 However, in this scheme, all the light (except for a small part which is absorbed or diffused by the mirrors) is sent back toward the laser. In order to further increase the light power in the interferometer, this light is sent back to the interferometer by what is called a recycling mirror (PRM in figure 1). This recycled light adds up with the incident beam, thus largely increasing the optical power in detector, that can reach several hundreds of kilowatts in the Fabry-Perot resonant cavities with ‘only’ a one hundred Watt input laser. A very high light power is important because it allows the improvement the sensitivity of the interferometer. With these resonant cavities coupled together, the interferometer can be seen as a giant light trap. If the optics would be perfect and the mirrors perfectly stable, no light should normally reach the photodetector except when the interferometer is crossed by a gravitational wave. The quality and stability of the optics represent therefore one of the major challenges of the interferometer.

The Virgo detector runs day and night, listening to all signals that arrive at any time from any part of the sky. The data coming from the interferometer as well as the ancillary data necessary to its control (10Mbytes/s) are subjected to a preliminary analysis for quality check and a quick detection of potentially interesting gravitational wave signals. The data is then recorded, stored in computing centers and put at the disposal of the scientific collaboration, for deeper analysis.