Advanced Virgo is a laser interferometer with perpendicular, 3 km long arms and suspended mirrors. The optical layout is shown in Figure 1. This is the configuration presently adopted in Advanced Virgo, during the third observation run (named O3, lasting 1 year from April 2019 to April 2020) performed jointly with the two Advanced LIGO detectors in the US and KAGRA in Japan.

The beam of a low-noise laser source (wavelength 1064nm, in the near infrared) is filtered geometrically and has its amplitude and beam pointing fluctuations further reduced by a 140 m long triangular cavity (called Input Mode Cleaner); then the resulting beam, about 25 W in power, is split in two equal parts by a 50% beam splitter. The two emerging beams propagate along 3-km long arms, are reflected by end mirrors and the resulting interference pattern, sensitive to the gravitational waves, is measured by a photodiode. To increase the phase shift observable with the interference pattern, and hence the amplitude of the signal induced by the passing gravitational wave, the effective length travelled by the beams before they are recombined is increased: this is achieved by inserting resonant optical Fabry Perot cavities in the arms, where the beams travel back and forth several times before interfering. To this end, each arm hosts a suspended input mirror (the Input Test Mass) and a suspended end mirror (the End Test Mass). The Finesse of the arm cavities is about 450, which means that the effective length travelled by the beams is increased by a factor 290 with respect to the physical arm length. To increase the laser power circulating in the arms, and hence to reduce the uncertainty in photon counting, a Power Recycling (PR) mirror is placed before the beam-splitter. The PR mirror sends back to the interferometer the light it reflects and that would otherwise return towards the laser source at the input: the power recycling factor is about 40. To reduce the quantum noise of photon counting, which limits the sensitivity at high frequencies, Advanced Virgo employs the squeezing technique: a carefully prepared state of vacuum of the optical field, a so-called squeezed vacuum, is injected into the interferometer from the output port.

More details on key technologies used to increase the sensitivity of Advanced Virgo are described at this page.

Advanced Virgo is following a sequence of periods of upgrades and of observations, planned in close collaboration and in coordination with the two Advanced LIGO detectors in the USA and also in collaboration with the Japanese KAGRA detector. An updated version of the plans for upgrading and observing periods of the world-wide network of Gravitational Wave detectors is shown in Figure 2. 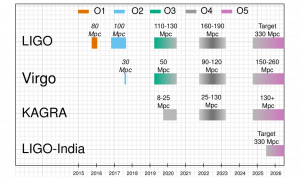 Figure 2: Table summarizing the current schedule of the global network of gravitational wave detector for the present and future observing runs. Table from: https://arxiv.org/abs/1304.0670

Advanced Virgo joined the Advanced LIGO detectors during the second observation period, named O2, in August 2017. With respect to the layout shown in Figure 1, during O2 the squeezing technique was not employed yet; furthermore, during O2 the laser power was lower and the mirrors of the Fabry Perot cavities were suspended by metal wires.

Among several other improvements the Phase I of Advanced Virgo Plus foresees the installation of a Signal Recycling mirror to implement a technique that will increase the sensitivity in the mid-high frequency range; the suspended SR mirrors will replace the SR lens shown in Figure 1. The squeezing technique will also be improved by the addition of a 300 m long Fabry-Perot Filter cavity that the squeezed vacuum state will travel through before being injected into the interferometer: this will allow to improve the sensitivity not only at high frequency by beating the quantum photon counting noise but also at low frequencies by overcoming the quantum noise coming from the pressure exerted on the mirrors by the impinging laser radiation.

The sensitivity of a gravitational wave detector is often quoted in terms of the BNS range, that is the distance at which the merger of a binary neutron star (BNS) system gives a matched filter signal-to-noise ratio (SNR) of 8; the distance is averaged over all the possible sky localizations and binary orientations. Each neutron star in the binary is assumed to have mass equal to 1.4 solar masses. The BNS range is given in units of megaparsecs (Mpc): a parsec is equal to 3.26 light-years. During O2 the BNS range of Advanced Virgo was about 25 Mpc; during O3 it is about 50Mpc (see present value in past 24h here) and it is planned to increase above 200 Mpc in O5 when the final configuration of the detector will be reached with the Phase II of AdV+.