Quick Questions on Virgo: “Are there other instruments like Virgo?”

Home / Quick Questions on Virgo: “Are there other instruments like Virgo?”

Today there is an initial network of gravitational wave interferometers around the world. In fact, having more than one detector is a key factor in rejecting spurious signals due to local noises and to localize the source position in the sky. There are the two 4-km long interferometers, of the Laser Interferometer Gravitational Observatory (LIGO), built in the United States in Hanford, Washington State and in Livingston, Louisiana. LIGO has also undergone a major upgrade and the Advanced LIGO detectors have resumed their observations in September 2015. There is also the GEO600 interferometer built near Hannover that has 600-meter long arms. A fifth interferometer, KAGRA, is under construction inside a mountain in the Kamioka mine in Japan and will soon be completed operative. The LIGO collaboration is also planning to install a third 4-km interferometer in India, within the LIGO-India project. 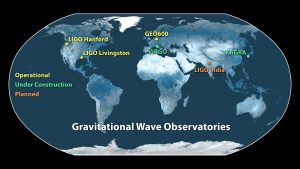