For centuries, humankind has observed the sky with the naked eye. In modern times we have learnt to study our universe by capturing the light – in a very wide range of wavelengths –  as well as charged particles, known as cosmic rays, and neutrinos, which could be emitted by very different astrophysical objects. All these messengers carry different information and travel for long distances before reaching us. After the detection of GW150914 in September 2015,  a new eye opened on the Universe: Gravitational Waves.

Gravitational Waves (GWs) are ripples in the fabric of spacetime emitted in a wide range of frequencies and amplitudes by different kinds of astrophysical systems, ranging from binary systems of compact objects, to supernovae explosions, to spinning isolated neutron stars and many more; even a relic background of GWs released shortly after the Big Bang is expected.

When accelerated motion of mass and/or energy takes place without spherical or cylindrical symmetry a GW is generated and propagates at the speed of light. At the present Advanced Virgo together with Advanced LIGO, GEO600 and KAGRA constitute the first world wide network of GWs detectors.

Advanced Virgo looks for GWs during dedicated observing campaigns, called Observing runs. These correspond to long periods (months) in which the detector continuously gathers data, looking for GWs. Within their first and second observing runs, Advanced Virgo and LIGO have detected 10 GWs from the merging of Binary Black Holes (BBH) and 1 GW from a Binary Neutron Star (BNS). These detections are all collected in a catalog called the GW transient catalogues 1 (GWTC-1).

Today, Advanced Virgo and LIGO have devised a realtime catalogue of GW event candidates: GRACEDB. This catalogue provides real time information of the GWs events such as distance and sky position. This is precious information for the astronomers who would like to point their telescopes to the GWs source.

The more the detector becomes sensitive the more the GW horizon we can span increases as described by the following animation.

CAPTION: The animation shows some of the astrophysical structures that are within detection range of Advanced Virgo.

The largest galaxies cluster reached by the Virgo detector is the Virgo Cluster composed of about 1500 galaxies. That cluster gave the name to the detector. The galaxies not belonging to any cluster are the vast majority and their distribution can be considered uniform. This means that the total number of galaxies within a certain distance is proportional to the enclosed volume, following approximately a cubic law. The final image shows the horizon achieved by Advanced Virgo in the second and third observation periods (respectively O2 and O3) and expected for the fourth and fifth ones (respectively O4 and O5), in comparison with the local galaxy supercluster, called Lanaikea. The detector reach out is given in terms of the Binary Neutron Star (BNS) range, i.e. the average distance at which the merger of a BNS system gives a matched filter signal-to-noise ratio (SNR) of 8 in Advanced Virgo with the current sensitivity; the distance is averaged over all the possible sky localisations and binary orientations. Each neutron star in the binary system is assumed to have a mass equal to 1.4 solar masses.

Just as the detection horizon of GW detectors increases the volume of the Universe that we can observe expands and the number of Galaxies we can reach through GW observation rises, as explained in the following animation.

What are the main sources of GWs in the sky? Below you can find out a list of astrophysical sources of GWs and even listen to their “gravitational sound”!

Indeed the GWs frequencies are the same frequencies as the sound waves that are audible by humans. Therefore, any signal measured by Advanced Virgo can be sent to a loudspeaker (after some filtering), allowing us to hear the symphony of the Universe. However, let us specify that GWs are not sound waves: the analogy with sound is made just to allow us a better comprehension of changes in amplitude and frequency of a GW signal.

A compact binary system is composed by two compact stellar objects, such as a Binary system of two Neutron Stars (BNS) or Binary system of two Black Holes (BBH) or a mixture of a Neutron Star (NS) and a Black Hole (BH) orbiting around each other: this is a typical source of GWs. As the system evolves with time, the two compact objects get closer and closer to each other till merging  because the system loses energy by the emission of GWs. This phenomenon is known as coalescence. As the two bodies approach each other, the GWs that are generated increase in frequency and amplitude. This type of signal is called “chirp”. You can hear an example for this kind of signal here.

During the final stage orbital decay and before the merging of the two bodies the GWs are strong enough to be observed in the frequency sensitive band of Advanced Virgo. When these GWs start to be detected by Advanced Virgo, the two bodies orbit around each other hundreds of times per second.

The first announced GW detected jointly by Advanced LIGO and Virgo (called GW170814)  is a signal of this kind coming from a BBH merger. The GW signal revealed two BHs of 25 and 30 solar masses, coalescing at a distance of about 2.2 billion light-years from us. Just before their merger in a single BH of about 53 solar masses, the two objects were spinning around each other about 200 times per second. Advanced Virgo was crucial to pinpoint the source skylocation in a narrow sky area of 60 square degrees. A significant improvement with respect to the 1160 square degree area obtained analyzing only the LIGO data.

On August 17th 2017, another GW arrived at the Advanced Virgo and LIGO detectors, GW170817. It was a very long GW lasting for about a minute in our detectors. Shortly after its arrival, the Fermi Gamma-ray Burst Monitor independently detected a gamma-ray burst coming from the same direction of the Sky, with a time delay of ~1.7 seconds with respect to the merger time. An extensive observing campaign was launched across the electromagnetic spectrum leading to the discovery of the corresponding optical and infrared emission. Combining these observations, we were able to understand that GW170817 was emitted during the merger of two NSs of about 1.4 solar masses, merging in a single body of ~2.80 solar masses.

The arrival of GW170817 opened a new era in the new-born GW astronomy: the multi-messengers GW astronomy thanks to the observation of both GWs and light emitted by the same astrophysical source.

A neutron star is a very compact, rapidly rotating and highly magnetised star, which represents the remnant core of a massive star which has undergone a supernova explosion. They have roughly the same mass as our Sun, but concentrated into a sphere of 10-km of radius, and they can spin up to 1000 times per second! If the star is not perfectly spherical, with only a tiny “mountain” on its surface, it will generate GWs. This type of GWs are different from the ones coming from compact binary coalescence, since they are emitted continuously by spinning neutron stars. We referred to this type of GWs as continuous GWs. 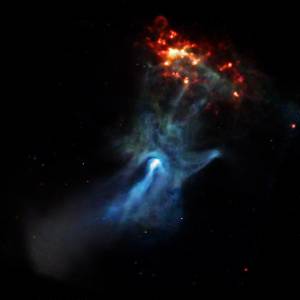 Advanced Virgo will search for gravitational waves coming from known pulsars (neutron stars from which we receive periodic light flashes).

A pulsar is observed at the center of the image: it is a small, dense object only 20 km in diameter. It is responsible for this beautiful X-ray nebula that spans 150 light years.

Pulsars are special cases of magnetically asymmetric neutron stars, from which we receive periodic light flashes each time the star completes a rotation. Until now, Advanced Virgo has not detected any signals from known pulsars.

This allowed us to conclude that Neutron stars are almost perfect spherical stars. For instance, we know that the pulsar J1400-6325 should not have “mountains” higher than 4 centimetres, otherwise we would observe a GW from this source.

Observation of neutron stars and pulsars will provide important information about their internal structure. Advanced Virgo will search for GWs emitted by neutron stars in the neighbourhood of the Sun, and in the rest of our own galaxy, the Milky Way.

“GW bursts” is a generic name given to short GW signals that last from a few milliseconds to few seconds. This type of GWs have not been observed yet and are expected to be associated with short-lived and violent astrophysical events such as supernova explosions.  Supernova explosions are one of the possible outcomes of a dying massive star. During this phase, the star collapses on itself due to the fact that the star self gravitational attraction cannot be sustained  anymore by the thermonuclear reactions in the star.

Eventually, the collapsing material becomes so dense that the star’s core becomes a hot neutron star. The newly born neutron star will cool by intense neutrino emission and the rest of the collapsing star will be disrupted in a supernova explosion. Advanced Virgo will be able to observe the GW emission from the collapse and explosion of such a massive stars at the end of their life.

In a galaxy like the Milky Way there are only a few such supernovae per century. Their observation will allow us to better understand what is hidden behind the matter ejected during the explosion and how black holes are created. You can listen to the possible “GW sound” associated to this supernova explosion!

Most cosmological models predict that we are bathed in a random background of GWs generated by sources that individually can not be detected.

Eventually the combination of all the GWs emitted by these sources will form a stochastic GW background that we will be able to observe.

For instance we expect that a background of  cosmological GWs is emitted in the first instants after the Big Bang. Detection of such a background would give us insight into the evolution of the Universe, providing a unique probe of the very early Universe.

In addition, an astrophysical background of GWs must result from the superposition of all the faint and distant sources that have emitted GWs since the beginning of the Universe. Detection of this background would help elucidate the star formation history and the evolution of astrophysical sources.

Every time humans have observed the sky with a new instrument, utilised new light wavelengths or messengers, unexpected objects and phenomena have been discovered.

When looking for GWs, we are also expecting surprises!

Cosmic strings are “defects” in the fabric of spacetime which might be formed during the evolution of the universe. These strings have never been observed, but are expected to emit GWs. Maybe Advanced Virgo will allow us to detect for the first time such kind of physical phenomena.

Cosmic strings are just an example of an unexpected  exotic GW source. There are many other theoretical GW sources  which might reveal an exotic astrophysical source…GWs leaking out from black hole mimickers, ultra-light boson clouds forming around spinning black holes and many others.

Play with the Gravitational Universe!