The discovery was made using the U.S.-based Laser Interferometer Gravitational-Wave Observatory (LIGO); the Europe-based Virgo detector; and some 70 ground- and space-based observatories. 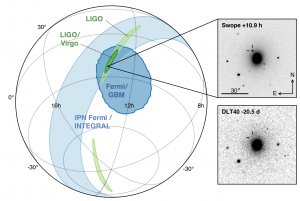 The image shows the localization of the gravitational-wave (from the LIGO-Virgo 3-detector global network), gamma-ray (by the Fermi and INTEGRAL satellites) and optical (the Swope discovery image) signals from the transient event detected on the 17th of August, 2017. The colored areas show the sky localization regions estimated by the gamma-ray observatories (in blue) and by the gravitational-wave detectors (in green). The insert shows the location of the apparent known galaxy NGC4993: on the top image, recorded almost 11 hours after the gravitational-wave and gamma-ray signals had been detected, a new source (marked by a reticle) is visible: it was not there on the bottom picture, taken about three weeks before the event.