The First Observing Run of the Advanced Detectors

Home / The First Observing Run of the Advanced Detectors

Gravitational waves are a consequence of the theory of General Relativity, published by Albert Einstein in 1916. They are ripples in the fabric of the space-time that propagate at the speed of light, and are produced when huge masses are accelerated or deformed. This happens in many astrophysical scenarios including supernova explosions or the gravitational interactions between black holes or neutron stars.

As they travel to Earth, these ripples in the space-time fabric bring with them information about their violent origins and about the nature of gravity that cannot be obtained by other astronomical tools.

The detection of the first gravitational wave will be a transformational event, opening new avenues for astrophysical exploration; gravitational waves are completely different from light, the main “messenger” used so far to study the Universe.

Astrophysical sources of gravitational radiation are interesting not only for what they tell about the population of stellar remnants, or the dynamics of supernovae explosions, but also for the extreme physical environment they provide. It is inconceivable that any laboratory on Earth will ever reproduce the physics which dominates the dynamics of neutron stars and black holes, making these objects incredible naturally occurring laboratories for physical investigation. The gravitational radiation emitted by these sources will allow us to probe the nuclear physics of ultra-dense matter, and the most startling aspects of general relativity.

In spite of the many experiments designed for their detection, gravitational waves have never been detected directly; however, the influence of gravitational waves radiating from a binary pulsar system (two neutron stars orbiting each other) has been measured accurately and is in excellent agreement with the predictions.

It is very difficult to catch gravitational waves: they travel through spacetime, deforming it and producing mini “spacetime quakes”. In this slightly warped spacetime, material bodies are strained, and distances are stretched and squeezed alternatively. The effect is incredibly tiny: when a gravitational wave crosses the multi-km arms of the detectors, they are stretched by only a billionth of a billionth of a meter, i.e. less than a thousandth of the diameter of a proton.

LIGO and Virgo were originally proposed as a means of detecting these gravitational waves. Each of the 4-km-long L-shaped LIGO interferometers (one each at LIGO Hanford and at the LIGO observatory in Livingston, Louisiana) and the 3-km-long Virgo interferometer (located at the European Gravitational Observatory, EGO, in Europe, near to Pisa) use a laser split into two beams that travel back and forth down long arms (which are enclosed in beam tubes from which the air has been evacuated). The beams are used to monitor the distance between precisely configured mirrors. According to Einstein’s theory, the relative distance between the mirrors will change very slightly when a gravitational wave passes by.

During the past decade the initial LIGO and Virgo interferometers searched the sky for gravitational waves in a joint observational campaign. Both LIGO and Virgo interferometers then underwent a major upgrade after a long shutdown period. This upgrade pushes all the employed technologies to their limit and allows an improvement of sensitivity by a factor of ten, providing a 1000-fold increase in the number of astrophysical candidates for gravitational wave signals.

LIGO has recently completed the installation of the Advanced LIGO detectors in the US observatories at Hanford, Washington and Livingston, Louisiana. As of August 2015, the two instruments have a reach of better than 60 Mpc for 1.4-solar-mass neutron star inspiral events, bringing them to a sensitivity sufficient for the initial Observing Run planned for the Fall of 2015.

The Virgo Collaboration is in the process of installing the Advanced Virgo instrument in the EGO Observatory. The schedule calls for the instrument to be finished early in 2016, and ready to participate in a joint LIGO-Virgo Observing run O2 in Fall 2016.

With conventional assumptions for the continuing advances in sensitivity and rates for the astrophysical sources, gravitational wave detections are likely to be detected before the end of this decade by the LIGO and Virgo advanced detectors. We expect the first detections to originate in coalescences of binary systems with neutron stars and low-mass black holes. These sources will be very exciting discoveries: a merger of neutron stars will show for the first time the birth of a black hole, and no examples of black hole-neutron star or stellar mass binary black hole systems are currently known.

Hungarian groups participate actively in both the LIGO and the Virgo Collaboration. They are looking forward to the start of the O1 data analysis.

In the LIGO collaboration the Eötvös Gravity Research Group (EGRG) led by Eötvös University and supported by MTA Atomki in Debrecen, and the Szeged University group will focus on contributing to LIGO data analysis efforts in various fields, particularly in studying potential sources of long-duration gravitational-wave transients, such as long gamma-ray bursts, quasi-periodic oscillations of highly magnetized neutron stars, and binary black holes with highly eccentric orbits. EGRG has also developed, manufactured and installed infrasonic detectors at both LIGO sites in the US as part of the Physical Environmental Monitoring system.

The Virgo Group at MTA Wigner RCP will focus on the detection of gravitational waveforms from melting binary objects, radiated just before the full collapse. This group helped to prepare the IT background of data analysis and group members are ready for complex data analysis with CPU and GPU based systems. They will use part of the computer resources of the Wigner Cloud, which was recently installed in the Wigner Datacenter. (This Datacenter serves the CERN with its Tier-0 unit, also.). In parallel Wigner RCP has launched the MATRA Gravity and Seismology Station project inside the Mátra Mountain, where a large scale seismological noise study will start by the end of this year in collaboration with the MTA Geodetic and Geophysical Institute and other Hungarian, Polish and Dutch institutes and universities.

The Dawn of Gravitational Astronomy

The first detection of a gravitational wave signal will be a major triumph for physics, providing the ultimate validation of the General Theory of Relativity, fostering the new field of “gravitational” astronomy, and fulfilling years of scientific, conceptual and technological efforts and developments. Almost one hundred years after Einstein predicted the existence of gravitational waves, the difficult challenge of detecting them will finally be overcome.

LIGO was designed and is operated by Caltech and MIT, with funding from the National Science Foundation (NSF). LIGO research is carried out by the LIGO Scientific Collaboration (LSC), a group of some 950 scientists at universities around the United States and in 15 other countries.

The Virgo interferometers was constructed by a collaboration of eleven laboratories of CNRS (France) and INFN (Italy). At present the Virgo collaboration is a group of 300 European scientists fully involved in the preparation of Advanced Virgo. It includes the Wigner group of Hungary, the laboratory of high energy physics NIKHEF in Nederland and the group of the Academy of Science in Poland.

EGO, is the consortium created by the French CNRS and the Italian INFN to construct, operate and upgrade the Virgo interferometer, and to promote cooperation in the field of gravitational waves research in Europe. 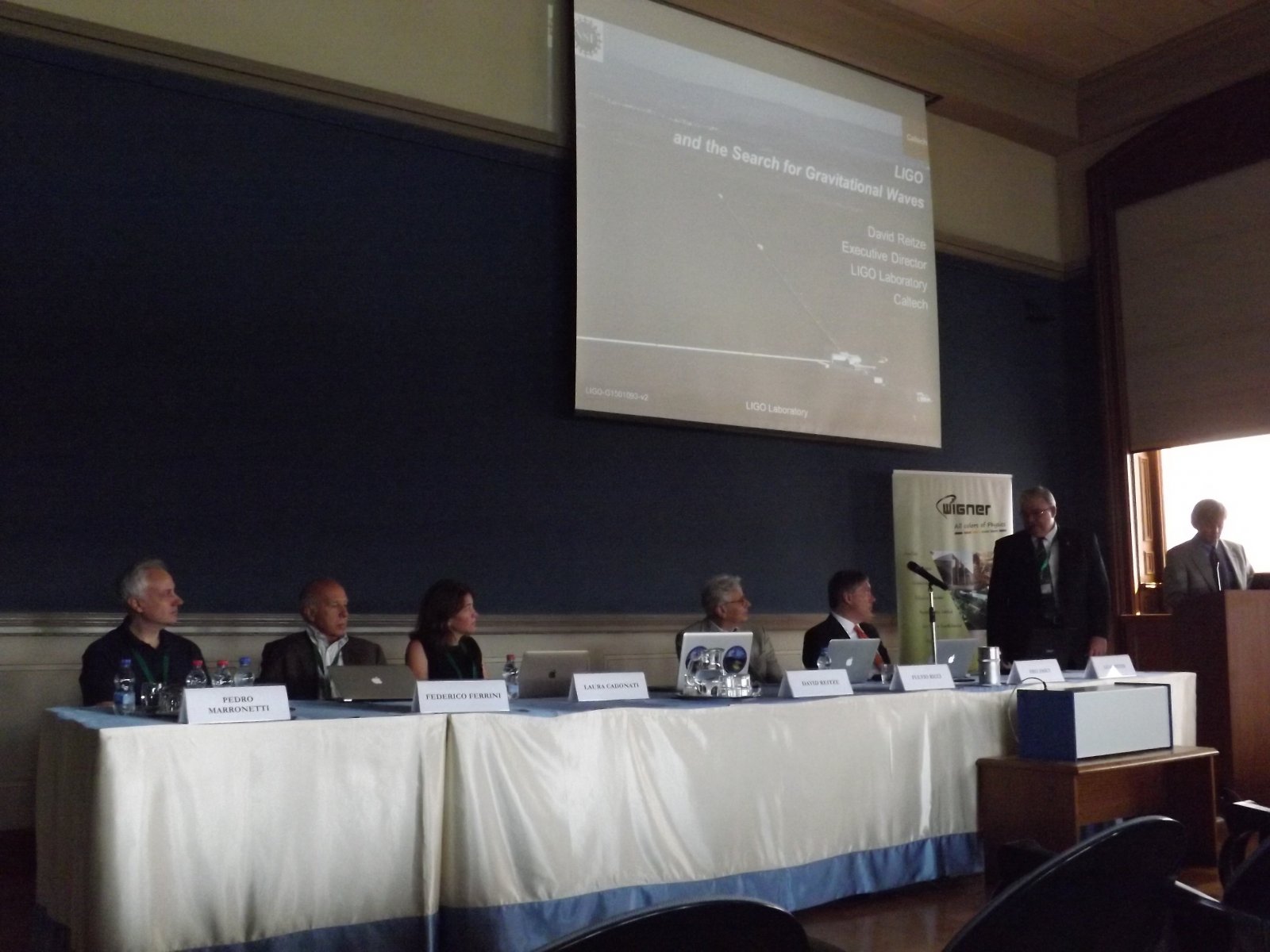