The European Researchers Night at EGO

Home /
Warning: Use of undefined constant multiple - assumed 'multiple' (this will throw an Error in a future version of PHP) in /var/www/html/wordpress/wp-content/themes/Minamaze_Pro/admin/main/options/00.theme-setup.php on line 193
Events • News / The European Researchers Night ...

The European Researchers Night at EGO

Science and theatre, visits to the Virgo experiment, stargazing parties. Lots of events for adults and kids. This is just a summary of the various events organized by EGO at the researchers nights last weekend on Friday 25 and Saturday 26 September. About 500 visitors during two days came to the EGO site to participate in the various activities scheduled for the event. These open days have been organized in partnership with Frascati Scienza and with the Bright 2015 initiative of the Tuscan Region.

A group of visitors on the EGO site during the European Researchers’ Night 2015 (Credits: EGO & The Virgo Collaboration)

We welcomed about 150 people to visit the Virgo experiment and to attend the introductory seminar on the experiment, that on Saturday was given by the Directory of EGO, prof. Federico Ferrini. During the visits, there was the opportunity to learn about the latest steps of the preparation for Advanced Virgo, and to see the central building and the control room of the experiment. 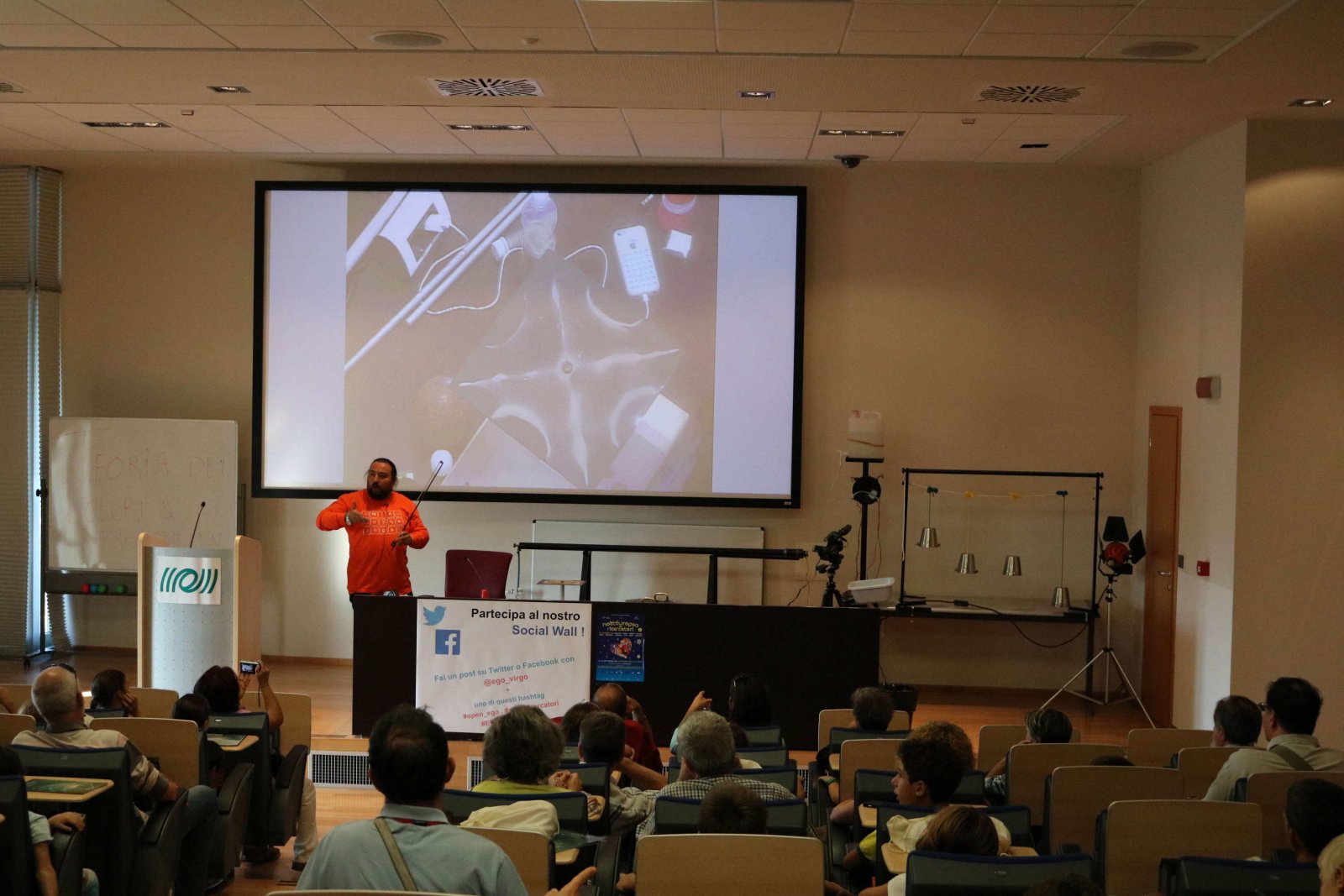 This year EGO hosted also two shows of great interest for the public. In the afternoon of Friday and Saturday visitors could attend the interactive show “Wave hunters” written by the staff of Psiquadro, a company specialized in science communication. In the evening, visitors were delighted to see “I Gravitons”, a piece of science and theatre based on a great mix of comedy and science. Actors from the company “I teatri della Resistenza” were joined by some EGO and Virgo scientists in a brilliant play about the marvels of general relativity.

A final scene from “I Gravitons” (Credits EGO & The Virgo Collaboration)

“I want to thank all the staff which contributed to the great results of these two days at the EGO side”, said Elena Cuoco, the EGO-Virgo Education and Public Outreach coordinator, “I was favorably impressed by the enthusiasm of all the EGO and Virgo personnel for these initiatives. I am still receiving many messages from the people who attended, saying that they were grateful for getting so much fun from somebody talking about science. This pays off all the work devoted to the organization of these days.”

During the event, we posted pictures in real time on Twitter and Facebook, that showed up on our social wall (hashtags #open_ego, #nottericercatori, #bright2015), in order to share the excitement for this great open days at EGO.